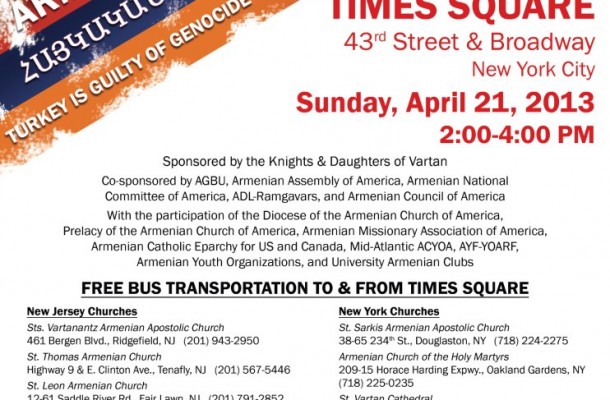 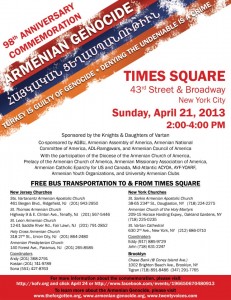 New York, NY—A large throng is expected to participate in the 98th Anniversary Commemoration of the Armenian Genocide to be held in Times Square (43rd St. & Broadway) on Sunday, April 21 from 2-4 pm. The organizers invite people of all backgrounds to join together to commemorate the Armenian Genocide and subsequent genocides during Genocide Awareness Month and to speak out against this horrendous crime against humanity.

The theme of the Armenian Genocide Commemoration is “Turkey is Guilty of Genocide: Denying the Undeniable is Criminal.” This historic event will pay tribute to the 1.5 million Armenians who were massacred by the Young Turk Government of the Ottoman Empire and to the millions of victims of subsequent genocides worldwide. Speakers will include civic, religious, humanitarian, educational, cultural leaders, and performing artists. This event is free and open to the public.

Dennis R. Papazian, PhD, immediate past National Grand Commander of Knights of Vartan and Founding Director of the Armenian Research Center at the University of Michigan-Dearborn, and Dr. Mary A. Papazian, President of Southern Connecticut State University, will preside over the ceremonies.

Dr. Dennis Papazian comments, “Recent momentous events encourage me to believe that the long vigil of the Armenian people waiting for recognition of their genocide by the Turkish government may be coming to a positive conclusion. An influential Kurdish leader in Turkey, a member of Parliament and vice-president of the pro-Kurdish Democratic Society Congress, Ahmet Turk, admitted that the Kurdish people played a significant role in the “torture and massacre of Armenians, Assyrians and Yezidis” during the Armenian Genocide and apologized to the Armenian people. Turk stated, “Our grandfathers and fathers were used in the injustices perpetrated against Armenians, Assyrians and Yezidis. There is blood on their hands. With the blood of these peoples they bloodied their own hands. Thus, as their children and grandchildren, we apologize.”

Papazian adds, “Itzak Alaton, the owner of one of the largest corporations in Turkey, urged the Turkish Socio-Economic Research Center to pursue the Turkish recognition of the Armenian Genocide.” “April 24, 1915 is just around the corner,” stated Alaton, “let us change our denialist policies. I am tired of the fear to face our past. Let us raise our voices to our deputies in Ankara and those deputies should raise their voices to their political parties and leaders in order for us to open our skeleton-fill closets.”

Dr. Papazian concludes, “These three significant events which took place without any reprisal from the Turkish government imply that a positive change may be in the air.”

The 98th Commemoration is organized by the Mid-Atlantic chapters of the Knights & Daughters of Vartan, an international Armenian fraternal organization headquartered in the United States, and co-sponsored by Armenian General Benevolent Union, Armenian Assembly of America, Armenian National Committee of America, Armenian Council of America and the Armenian Democratic League-Ramgavars.