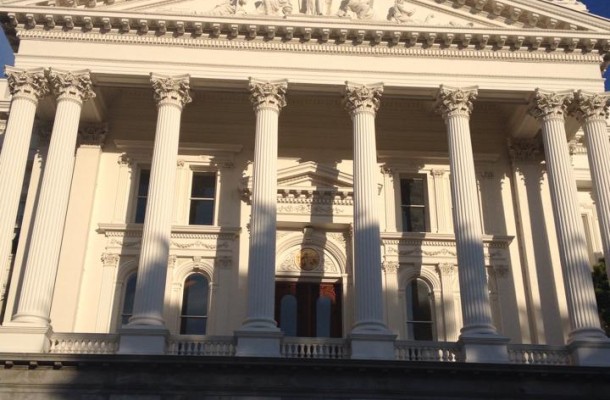 SACRAMENTO, CA – The Armenian Council of America, in partnership with the Armenian-American community of Sacramento, organized an informative and empowering evening vigil, commemorating the 99th anniversary of the Armenian Genocide at the California State Capitol on Sunday, April 6.

The program for the solemn occasion led by Mistress of Ceremonies Ms. Christine Aghakhanian, included dignitaries, members of clergy and community leaders, began with an invocation by Father Asoghig Jamgochian of the St. James Armenian Church, followed by remarks by ACA Board Member Mr. Krikor Moloyan and Social Democrat Hunchakian Western Region Executive Committee member Mr. Suren Khudanyan. Both gentlemen expressed the worth of acknowledging the Genocide and addressing the issue so that history does not repeat itself as it has in recent years in other parts of the world.

Among the dignitaries in the audience was Assemblymember Roger Dickinson of the 7th Assembly District who expressed his solidarity for the Armenian Cause. Also in attendance were a group of over a dozen SEIU Local 721 Armenian Caucus members, who travelled to Sacramento from Los Angeles to partake in the annual State Capitol Armenian Genocide commemorative events.

A duduk performance of “Dle Yaman” and “Groong” by Samvel, enchanted the audience as father and son duo Masis and Arshak Isayan sang “Mayr Hayastan.” Ms. Ruzanna Yeghiazarian gracefully recited Paruyr Sevak’s “Anlereli Zangakatun“ as Ms. Lena Manoogian sang “Adana” and “Cilicia” to pay tribute to those who perished during the Genocide.

The event concluded with a hokehangist prayer by Father Jamgochian who prayed for the memory of the victims of the Genocide. 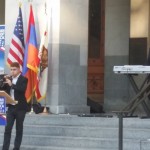 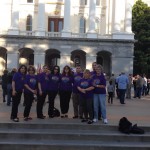 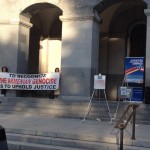 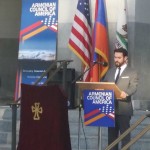 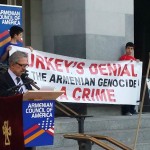 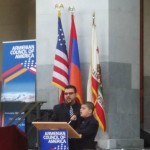 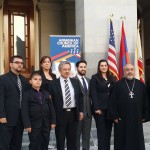 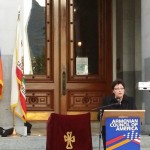 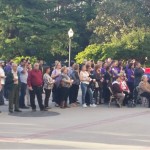 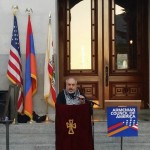 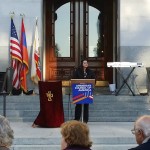 The following is Mr. Krikor Moloyan’s speech conducted at Sunday’s vigil, commemorating the 99th anniversary of the Armenian Genocide at the California State Capitol:

It is with a grave heart that I stand before you here today, to commemorate the 99th anniversary of the Armenian genocide. The scale of those atrocities was so immense that it would be very difficult to find an Armenian who is not related to a survivor. For instance, my grandparents eye-witnessed and survived the genocide.

Generalized stories of those tragic events are common knowledge and were retold to me often while growing up within the Armenian community. However, I was curious to hear my family’s experiences and perhaps make them my own. It was personal. So as a curious youth, I relentlessly prodded my grandparents to share and even relive their hellish experiences.

It felt selfishly cathartic, but those stories were a pertinent reminder of the alternate realities where my grandfather and his brother were not the sole survivors of their entire clan; where his entire family was not slaughtered and was still living peacefully in their ancestral home of Garin.

Or perhaps my grandmother’s grandfather would have continued to represent the city of Urfa in the Turkish parliament alongside his friend: the lawyer and parliamentarian, Krikor Zohrab. Instead they were invited to Istanbul by the Turkish government with countless other intellectuals. A few days after they had left, my grandmother and her father saw that their bloodied clothes were being auctioned at Urfa’s market. This prompted them to gather their things in haste and attempt an escape to Lebanon.

Many of us have heard of these gruesome stories; yet have we become any more vigilant to prevent such atrocities from reoccurring?

Some of us may have but many are left ignorant.

As an Armenian-American, I’ve taken a silent oath to be a vigilant global citizen and carry out my duty as a human being to prevent any and all genocides. To educate future generations of mankind’s very real and disgraceful past. To guarantee that such abominable violations are never repeated.

Yet how may we be guarantors of this monumental task? Through introspection, education and dedication. Were the perpetrators of the Armenian genocide successful? No.

The Turkish government, having almost depleted the Anatolian peninsula of its Armenian inhabitants – had freed itself from the second class citizens who had significantly contributed to the Turkish economy, culture and academia. But through their inhumane destruction of Armenian society they created something new.

The Armenians who had survived, fled to foreign countries. Many in the Middle East accepted the emaciated refugees with open arms. Others made their way to Europe and America. Like many immigrants, Armenians arrived on the east coast. Armenians like my grandfather chose to add another leg to their journey from Soviet Armenia and travel to California. Having lived through Siberian winters for over 30 years, my grandfather had promised himself to never live through one again.

This great state graciously took us in and gave us the opportunity to do away with the vestiges of inequality, discrimination, famine, and death. California has been a home for Armenians who escaped the Lebanese civil war, the Iranian revolution, Soviet oppression, and even Nazi internment camps. As a result, California is home to the largest Armenian American constituency in the United States. Wherever this cruel fate discarded Armenians, they have made those foreign shores home and have gone to great lengths to improve their communities.

Now that we have achieved a modicum of stability and comfort – it falls upon our shoulders to educate and inform future generations. However, ultra-nationalist Turkish officials and even a few historians are perpetuating and encouraging a denialist movement. These denialists suggest that the Armenian genocide never occurred, or that the Armenians themselves committed genocides against Turks. These claims are nothing more than poor attempts at deflecting and mitigating the historical fact of genocide.

California officials have done a commendable job at implementing discussions of genocide in high school curriculums. Such discussions must be facilitated as early as possible in order to build a society whose future generations are tolerant of all cultures and find life to be sacred.

California colleges have been engaging the topic for decades and continue to provide unique experiences to students. One such course was the Armenian Genocide Survivor’s Memoir project spearheaded by Professor Richard Hovannisian.

But focusing on California is not enough. We must reach out to the people of Turkey and form coalitions with its historians, textbook publishers and educators in order to facilitate a more tolerant and bright future. Turkey’s new generation has demonstrated time and time again that they cannot be cowed by the mentality of the old guard. Last year, they fought for their democratic rights in Taksim Gezi Park sparking the weeks of riots last year. More recently, Turkish youths circumvented the government’s ban on twitter and youtube: a feeble attempt to dissuade grassroots movements among the youth.

However the youth of Armenia’s other neighbor do not have the privilege of being scrutinized by the European Union. Azerbaijan continues to threaten ethnic Armenians with extermination.

Similarly, the Republic of Nagorno-Karabagh is currently under rhetorical threats of extinction by many Azerbaijani government and military officials. However, the people of Karabagh have the right to exercise their self-determination. Azerbaijani officials consistently argue that their territorial integrity is being violated. This cannot be further from the truth because Joseph Stalin gave the territory of Karabagh to the Azerbaijani Soviet Republic. Then once the Soviet Union collapsed, the people of Karabagh chose to remain independent of a ruling elite which had relentlessly persecuted this minority. Territorial integrity doesn’t even come into the equation because the Soviet territories were voided upon its collapse.

The Armenian Council American and California’s Armenian American community support Assembly Joint Resolution 32, which recognizes Nagorno Karabagh as a sovereign nation, and insist that the Azerbaijani government defer to the self-determination of the people of Karabagh and respect its territorial sovereignty.

As Armenian Americans it is our responsibility to be active and engaged citizens. The Armenian Council of America encourages active participation in local government and at the very least we must engage our state and federal representatives. Armenian Americans! We must foster environments of tolerance and acceptance across the globe, inform non-Armenians of our culture and history.

Today, we honor the memory of those slaughtered at the turn of the century 99 years ago. But more importantly, we honor and commemorate those Armenians who lived. No human should have to see what they saw, hear what they heard, feel what they felt. No human should bear the weight of that experience. But they did. And they survived. No, they didn’t just survive. They thrived. They lived. Their legacy continues through our hard work towards recognition of the Armenian Genocide and it is our moral obligation as descendants of the martyrs and survivors to honor them.