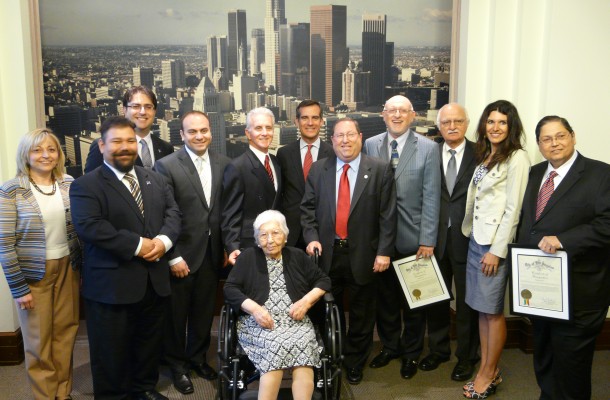 The commemoration was led by Councilmember Paul Krekorian and former City Council President Eric Garcetti, recognizing Rose Garjian, a 104 year old Genocide survivor, honoring Ararat Home for its immeasurable contributions to the Armenian-American elderly community, as well as honoring the AGBU Generation Next program for transforming the lives of Armenian-American youth.

Councilmember Krekorian expressed the difficulty in grasping the magnitude of Genocide – a Genocide in a tiny nation to have lost one and a half million Armenian men, women and children. To put it into perspective, he asked everyone to remember what they felt on September 11th when thousands of victims were lost to a horrible act of terror, and to imagine if that terror was experienced every day for an entire year. “It is very important for all of us to recognize and condemn man’s inhumanity towards man,” Krekorian said.

“As the Councilmember representing Little Armenia, who has traveled to Yerevan to make us sister cities, I’m deeply aware of the lasting impact of the Genocide,” Councilmember Eric Garcetti said. “It’s important that the Genocide is never forgotten–that is the best way to ensure that tragic chapter in history is never repeated.”