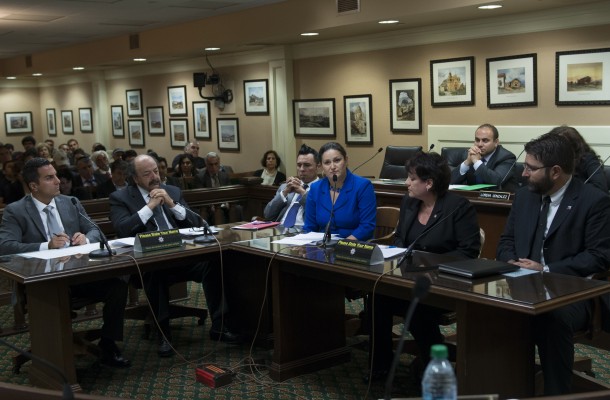 SACRAMENTO—With a 9 to 1 vote and, 1 abstention, the California State Assembly Rules Committee, on Monday, May 5, 2014, passed Assembly Joint Resolution 32 which calls for the United States to recognize the Nagorno-Karabakh Republic as a sovereign state and promoting the right of “self-determination and democratic independence.”

AJR 32, introduced by Assemblymember Mike Gatto (D-Los Angeles), makes California the most populous governmental entity to call for Nagorno-Karabakh’s recognition or to recognize it outright.

“It has been my privilege to work with the leaders of the local Armenian American community and their outstanding representatives on this Resolution and I am proud that it has passed in the Rules Committee and is on its way to the Assembly floor for a full vote,” said Assemblymember Gatto.

In support of AJR 32, Sevak Khatchadorian, Chair of the Armenian Council of America, provided testimony regarding the conflict between Armenia and Azerbaijan in relation to Nagorno-Karabakh.

He urged the committee to pass the Resolution on the basis of the democratic ideals upheld by California legislators throughout history who have advocated for the rights of people around the world. The legislature has always been at the forefront against apartheid, against nations who commit genocide and at the forefront to support nations struggling to gain and maintain freedom and democracy through self-determination.

“Today’s victory marks a monumental historic achievement towards the establishment of peace and democracy for the ethnic Armenian population of the NKR who have been subjected to decades of struggle and oppression by the Azeri government,” said Khatchadorian. “I’d like to express my deepest gratitude to Assemblymember Gatto for introducing this very important piece of human rights legislation and I commend all the Members who co-authored and voted in favor of AJR 32. The symbolic gesture of the passage of this Resolution is the first step towards federal and international recognition of the NKR and we will continue our efforts until democracy is achieved.”

Joining Khatchadorian in testifying on behalf of California’s over 1 million Armenian American community were Alina Nalbantyan, who hails from the Shahoumian region of Artsakh, and Nora Hovsepian from the Armenian National Committee of America.

Along with Assemblymember Gatto, Assemblymember Katcho Achadjian (R-San Luis Obispo) addressed the Assembly Rules Committee, stressing the importance of the California State legislature to pass AJR 32, and support a people who strive to create a peaceful and democratic nation.

Co-author of the Resolution, Assemblymember Cheryl R. Brown (D-San Bernardino) who visited Armenia and Nagorno-Karabakh last September reiterated her support. “I’m supporting this Resolution because I believe people should have an independent nation and should be free to vote however they want to vote,” said Brown. “People in Karabakh are warm, welcoming, happy and have a strong desire for self-determination. I do understand second class treatment and my heart goes out to everyone in this room.”

Correcting the Azeri lobby, Assemblymember Adrin Nazarian (D-Sherman Oaks), stated that Shushi is historically Armenian, and his grandparents were natives of Shushi prior to being forced to relocate due to Azeri aggression.

Echoing Assemblymember Brown’s sentiments, Assemblymember Scott Wilk (R-Santa Clarita), Vice Chair of the Rules Committee, who also visited Armenia and Nagorno-Karabakh, set the record straight during the hearing and refuted the fallacies presented by the Azeri lobby, he stated: “I was struck by the desire of the people of Artsakh to be free, and stand with a freedom loving people of Artsakh.” He also stressed the fact that the Azeri government is on a mission of distorting historical facts and utilizing oil money to hire lobbyist throughout the nation and pass various resolutions that reaffirm those distortions.

Four other states have passed similar legislation. AJR 32 is slated to be read during the State Assembly Floor on May 8th where it will have an opportunity to be voted on during the General Session.

A full text of AJR 32 can be found here.