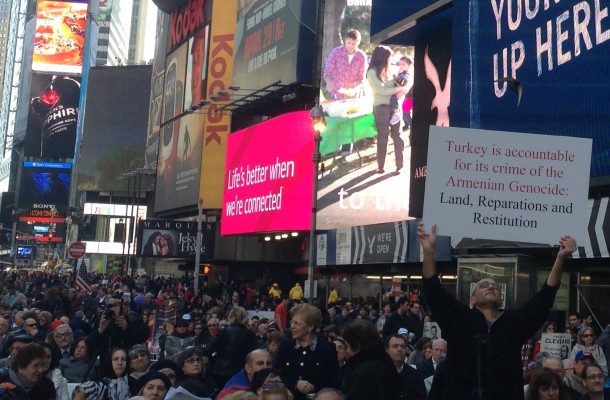 Among the thousands of tourists and native New Yorkers who crisscrossed through the bustling and overflowing streets of Times Square on Sunday afternoon, April 21, there were only three individuals whose universal message of human suffering and injustice mattered most.

Surrounded by dazzling billboards, scores of people and looming skyscrapers, Perouz Kaloustian, Arshalouis Dadir and Charlotte Kechejian stood out as the survivors of one of the most catastrophic events in world history. The three women, a century old, sat in the front row of the 98th Armenian Genocide Commemoration, huddled underneath blankets and braving the cold so they could be present in Times Square as living proof to the assembled crowd that numbered in the several thousands. 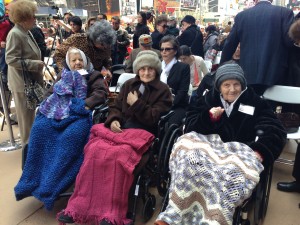 But the survivors were also there to inspire. Standing just a few feet away were the disciplined and earnest Homenetmen Scouts, standing at attention in their crisp uniforms and taking turns holding the flags of the United States, Armenia and Nagorno Karapagh throughout the program. The close proximity of these two generations – those who survived to tell the story – and those who will continue the memory – culminated in a silent promise of never forgetting, which emerged as the theme of the afternoon as politicians and guest speakers promised the survivors that their struggles and stories will continue to live on.

“We promise that even when the last survivor is gone, we’ll keep the memory of the Armenian Genocide alive because it’s our duty,” said Schumer as his voice reverberated through Times Square to thunderous applause. “We come here to tell the world, to tell Turkey, to tell everyone, that you cannot deny the genocide.” 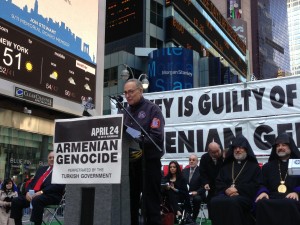 Schumer reiterated his commitment to the Armenian Genocide Resolution in Congress and to the significance of its passing.

“Every time a genocide occurs we say never again, but if we cannot remember those in the past, we might not be able to prevent those in the future.” 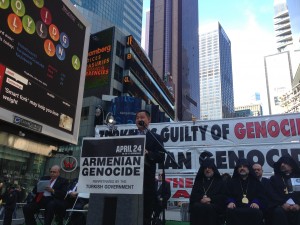 “This is a fact of history that has to be accounted for and confessed to,” said Liu. “Only then can we move forward.”

Drawing on his own background as an Asian-American who immigrated to the U.S. at the age of five, Liu spoke of his long-time contact with the Armenian community in Flushing, Queens, where he and his family settled. Growing up in Flushing, he said he learned of the Armenians and became involved in the community there, which included visits to the New York Armenian Home, which has served as a residence for survivors of the Armenian Genocide.

“I’m hoping action is taken by sending a strong message here in New York City and around world that the Armenian Genocide will not be forgotten,” said Liu. 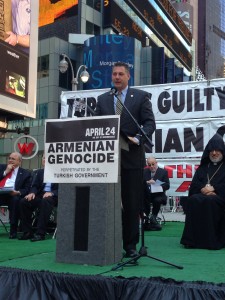 Peter Koutoujian, Sheriff of Middlesex County, Massachusetts and a former member of the Massachusetts House of Representatives, delivered meaningful remarks tinged with emotion as he reflected on those killed and injured during the recent bombing of the Boston Marathon, in which he was an instrumental figure in the capture of the perpetrators. He tied in the innocence that was lost in the senseless tragedy to the innocence lost during the Armenian Genocide almost one hundred years ago. He referred to the difficult journey of his own grandparents, Abraham and Zarouhi Koutoujian, who fled their home in Marash during the genocide.

Koutoujian noted that he learned of patriotism for his country and his people from his family, who sought refuge from religious persecution in the U.S.

“Together we can stand Boston strong, New York strong and Armenian strong,” Koutoujian concluded, enlivening the audience with his engaging and compassionate words.

In his remarks, Dr. Dennis Papazian, Professor Emeritus of History at the University of Michigan-Dearborn and former Grand Commander of the Knights of Vartan, said that there had been no need for recognition of the Armenian Genocide in the past because survivors and diplomats, such as U.S. Ambassador to the Ottoman Empire, Henry Morgenthau, Sr. served as witnesses to the atrocities of the genocide.

Dr. Papazian spoke of the compelling amount of published evidence on the Armenian Genocide, including one documenting a collection of news reporting by the New York Times during that time and a book citing the numeration of Armenians expelled from each town, city, and village in the Ottoman Empire. He noted that aside from factual evidence, prominent people have been stepping forward to recognize the Armenian Genocide.

“Times have changed and there’s reason for hope,” said Dr. Papazian. “There have been acknowledgments of the Armenian Genocide by Turkish scholars and public figures.” One influential individual who has not only accepted the reality of the Armenian Genocide, but also published a book about it is journalist Hasan Cemal, the grandson of Cemal Pasha, who was one of the architects of the genocide.

“We are winning the battle and we will continue to win,” said Dr. Papazian.

The positivism of Dr. Papazian’s words rang true in Times Square as thousands gathered in solidarity, in particular the Armenian youth, who were a strong presence this year. Wearing black tee shirts with red and white print that stated, “Our Wounds Are Still Open, 1915,” draping themselves in the Armenian flag and holding signs demanding Turkey and U.S. recognize the Armenian Genocide, they proved to the survivors – and to the world – that they will not falter in the responsibility they have inherited for worldwide recognition.

Delivering remarks on behalf of the co-sponsors of the commemoration were Natalie Gabrielian (AGBU), Alex Karapetian (Armenian Assembly), Dr. Vagheenag Tarpinian (ADL) and Gary Sinanian (Armenian Council of America). Arpi Candan spoke on behalf of the Grand District Representatives of the Daughters of Vartan.

Ms. Ania Avsharian and Nairi Kaprielian, under the direction of Maestro Vagharshag Ohanyan, sang the national anthems of the United States and Armenia, as well as “God Bless America.”

The Armenian Radio Hour of New Jersey, under the direction of Dr. Vartan Abdo, streamed the event live in video format worldwide, reaching over 20,000 people, with the assistance of his dedicated volunteer staff.